As more people living with Dementia, through advocacy and campaigning,  challenge the status quo, challenging how things are done and decided for us, advocating for replacing the medical model of care with the social model of care and a rights based future, they expose themselves to Gaslighting by the guardians of the status quo.

By challenging what has always been, with what should be, we are rebuked by the establishment and abused and manipulated via gaslighting with the intention of silencing such challenges to the status quo. 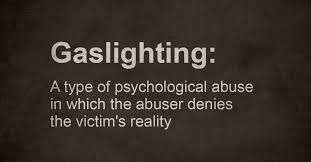 Gaslightings key feature is invalidation, it is a sophisticated manipulation tactic which certain types of personalities use to create doubt in the minds of others, the insidious denial of reality, being denied what we experience, that we know to be true.

Gaslighting works as a poison – it is the victim’s doubts and mistrust of their own perceptions of reality that makes the technique effective. That means that gaslighting is an excellent way of targeting someone with whom there is already a power imbalance (e.g. doctor or therapist and patient, teacher and student, adult and child, boss and worker, popular and unpopular).

Gaslighting an insidious tool, it is a form of intimidation or psychological abuse in which a person seeks to sow seeds of doubt in a targeted individual or in members of a targeted group, making them question their own memory, perception, and quite often, sanity.

Using persistent denial, misdirection, contradiction, and lying, gaslighting involves attempts to destabilize the victim and delegitimize the victim’s belief, providing false information to the victim – having the gradual effect of making them anxious, confused, and less able to trust their own memory and perception.

The gaslighter may not even know they are doing anything strategic or manipulative. They lack self-awareness and may just think they are expressing themselves directly, or are prone to unflinching honesty, saying it “like it is.”

Gaslighters will discredit people by denial, twisting and subtly reframing facts in their own favour, countering and discounting information, where eventually you begin to doubt yourself.

Targets of gaslighting are manipulated into turning against their cognition, their emotions, and who they fundamentally are as people, to question themselves in a way that is detrimental to their mental wellbeing and will actually damage your trust in yourself and your experience of reality.

Gaslighting is a powerful weapon of the abuser and can be very detrimental for the victim.

Gaslighting, especially when it is long lasting, can cause anxiety, depression and even psychosis.

Gaslighting creates cognitive dissonance given the frequent mixed messages and over time gaslighting can lead to depression, anxiety, anger, fear and significant insecurity,.

Gaslighting behavior can cause shame (that you’re not remembering or doing things correctly), a feeling of emotional instability (because you don’t know what to think, feel or believe) and feelings of helplessness, confusion or low self-esteem.

The difference with gaslighting is that there is another person or group that’s actively engaged in trying to make you second-guess what you know is true.

For people living with Dementia, Gaslighting is a form of abuse, it is an unnecessary burden on top of the already onerous daily challenges that we all face.

People living with Dementia do not get up one morning and decide they have Dementia, none of us choose to be exposed to the misperceptions, stigma and abuse that a diagnosis brings.

The questioning of our diagnosis we have been given by a professional through to being told we don’t look like we have Dementia are forms of gaslighting/abuse based on established perceptions and are not based in fact.

As any competent professional will acknowledge, the only accurate process of a diagnosis is after death via an autopsy.

In the meantime, people living with Dementia rely on SPECT and PET scans along with the competencies of those giving the diagnosis for the accuracy of that diagnosis.

Gaslighters are the abusers in a relationship, people living with a Dementia are the victims, who hope the establishment would protect them not abuse them.

One thought on ““Gaslighting””