A time to remember and remind the younger generations of the atrocities of the Second World War.

It is estimated that six million members of the Jewish faith were brutally slaughtered during World War II as well as millions of other ethnic minorities including gypsies and the disabled.

Shortly after coming to power the Nazis began a propaganda campaign against mentally and physically disabled Germans. They did not fit into the Nazi stereotype of the pure ‘Aryan’, that is physically fit with an obedient mind to serve the Reich.

In addition, the Nazis viewed disabled people as a ‘burden’ on society, and said that they were ‘unable’ to work and ‘drained resources from the state’ and sadly these comments can be heard today.

As early as July 1933, the Nazis passed a law that allowed forced sterilisation of 360,000 men and women, who were deemed likely to produce ‘inferior’ children to prevent “hereditary diseased offspring”.

On July 14, 1933, the German government instituted the “Law for the Prevention of Progeny with Hereditary Diseases.” This law called for the sterilization of all persons who suffered from diseases considered hereditary, including mental illness, learning disabilities, physical deformity, epilepsy, blindness, deafness, and severe alcoholism.

With the law’s passage the Third Reich also stepped up its propaganda against the disabled, regularly labeling them “life unworthy of life” or “useless eaters” and highlighting their burden upon society.

The law allowed forced sterilisation of 360,000 men and women, who were deemed likely to produce ‘inferior’ children to prevent “hereditary diseased offspring”.

A diagnosis of “feeblemindedness” provided the grounds in the majority of cases, followed by schizophrenia and epilepsy.

Forced sterilization in Germany was the forerunner of the systematic killing of the mentally ill and the handicapped. In October 1939, Hitler himself initiated a decree which empowered physicians to grant a “mercy death” to “patients considered incurable according to the best available human judgment of their state of health.” The intent of the so called “euthanasia” program, however, was not to relieve the suffering of the chronically ill. The Nazi regime used the term as a euphemism: its aim was to exterminate the mentally ill and the handicapped, thus “cleansing” the “Aryan” race of persons considered genetically defective and a financial burden to society.

The idea of killing the incurably ill was posed well before 1939. In the 1920s, debate on this issue centered on a book co authored by Alfred Hoche, a noted psychiatrist, and Karl Binding, a prominent scholar of criminal law. They argued that economic savings justified the killing of “useless lives” (“idiots” and “congenitally crippled”).

Economic deprivation during World War I provided the context for this idea. During the war, patients in asylums had ranked low on the list for rationing of food and medical supplies, and as a result, many died from starvation or disease. More generally, the war undermined the value attached to individual life and, combined with Germany’s humiliating defeat, led many nationalists to consider ways to regenerate the nation as a whole at the expense of individual rights.

In 1935 Hitler stated privately that

“in the event of war, [he] would take up the question of euthanasia and enforce it” because “such a problem would be more easily solved” during wartime.

War would provide both a cover for killing and a pretext–hospital beds and medical personnel would be freed up for the war effort. The upheaval of war and the diminished value of human life during wartime would also, Hitler believed, mute expected opposition. To make the connection to the war explicit, Hitler’s decree was backdated to September 1, 1939, the day Germany invaded Poland.

For instance, after the Nazi invasion of Poland, the Nazis murdered thousands of seriously ill Poles in hospitals.

The experience gained as a result of the euthanasia programme was also put to use from 1941 as the Nazis sought to murder the Jews of Europe. 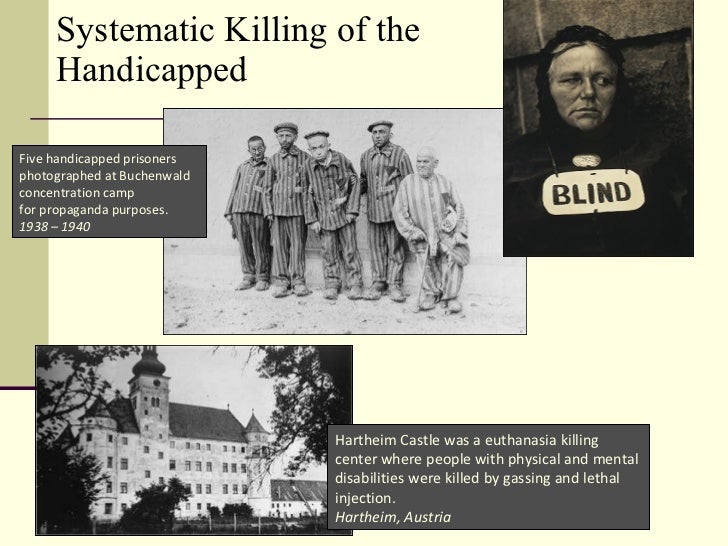 Systematic Killing of the Handicapped Five handicapped prisoners photographed at Buchenwald concentration camp for propaganda purposes. 1938 – 1940 Hartheim Castle was a euthanasia killing center where people with physical and mental disabilities were killed by gassing and lethal injection. Hartheim, Austria

Fearful of public reaction, the Nazi regime never proposed a formal “euthanasia” law. Unlike the forced sterilizations, the killing of patients in mental asylums and other institutions was carried out in secrecy. The code name was “Operation T4,” a reference to Tiergartenstrasse 4, the address of the Berlin Chancellery offices where the program was headquartered.

Physicians, the most highly Nazified professional group in Germany, were key to the success of “T-4,” since they organized and carried out nearly, all aspects of the operation. One of Hitler’s personal physicians, Dr. Karl Brandt, headed the program, along with Hitler’s Chancellery chief, Philip Bouhler. T-4 targeted adult patients in all government or church-run sanatoria and nursing homes.

These institutions were instructed by the Interior Ministry to collect questionnaires about the state of health and capacity for work of all their patients, ostensibly as part of a statistical survey and were responsible for at least 70,000 deaths. 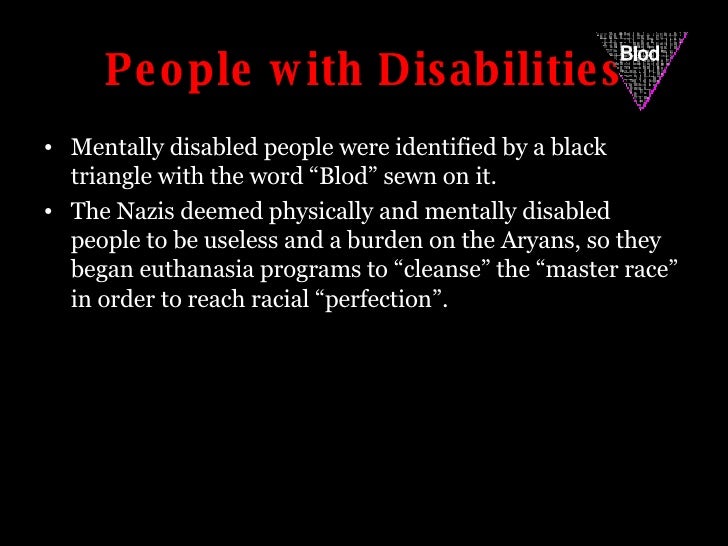 The completed forms were, in turn, sent to expert assessors physicians, usually psychiatrists, who made up “review commissions.” They marked each name with a “+,” in red pencil, meaning death, or a “” in blue pencil, meaning life, or “?” for cases needing additional assessment. These medical experts rarely examined any of the patients and made their decisions from the questionnaires alone. At every step, the medical authorities involved were usually expected to quickly process large numbers of forms.

The doomed were bused to killing centers in Germany and Austria walled-in fortresses, mostly former psychiatric hospitals, castles, and a former prison — at Hartheim, Sonnenstein, Grafeneck, Bernburg, Hadamar, and Brandenburg. In the beginning, patients were killed by lethal injection. But by 1940, Hitler, on the advice of Dr. Werner Heyde, suggested that carbon monoxide gas be used as the preferred method of killing. Experimental gassings had first been carried out at Brandenburg Prison in 1939. There, gas chambers were disguised as showers complete with fake nozzles in order to deceive victims — prototypes of the killing centers’ facilities built in occupied Poland later in the war.

To a certain extent both the Protestant and Catholic Churches in Germany protested against the euthanasia programme. In July 1941 a letter from the Catholic bishops was read out in all churches, declaring that it was wrong to kill.

Opposition to the programme increased amongst the Catholic population of Germany. During July and August 1941, Bishop Clemens August Graf von Galen, a Catholic Bishop issued three sermons condemning this practice; he sent a telegram of the third sermon to Hitler calling on him to “defend the people against the Gestapo”. This third sermon was also reproduced and sent all over Germany to families, and even to German soldiers on the Western and Eastern Fronts.

Fearing a public uprising across Germany, Hitler ordered a stop to the killings.

The Murder of the Handicapped

However, the policy continued in one way or another through to 1945.

Between the middle of 1941 and the winter of 1944-45, in a program known under code “14f13,” experienced psychiatrists from the T-4 operation were sent to concentration camps to weed out prisoners too ill to work. After superficial medical screenings, designated inmates Jews, Gypsies, Russians, Poles, Germans, and others were sent to those “euthanasia” centers where gas chambers still had not been dismantled, at Bernburg and Hartheim, where they were gassed.

Wartime, Adolf Hitler suggested, “was the best time for the elimination of the incurably ill.” and the murder of the disabled continued until 1945.

It is important not to repeat the mistakes of history, yet further genocides have continued worldwide, including in Rwanda and Bosnia.

You would think that society would have learned from the past reader but a quick search on Reddit shows a darker side to society.

The developmentally disabled are a burden on society

I believe severely mentally disabled people are nothing but a burden and a waste of everyone’s time.

The Bundestag voted in November 2011 to erect the memorial in honor of the victims of the Nazi’s so-called euthanasia program – code-named T4 – for Germans who were not considered “useful,” such as those who were physically handicapped, or psychiatric patients deemed unworthy to live.

At the unveiling of the memorial in Berlin, the then German culture minister, and Klaus Wowereit stated:

“We often forget that even today, around 10 percent of the people in our country live with mental or physical disabilities,”

“Our society has a social responsibility to these people… No life is unworthy.

You have our solidarity, our encouragement and our empathy.

You have the right to an equal life in our society.

Because only by caring is our society worth living in.”

In 21st Century Britain reader, everything has changed, or has nothing really changed…

It’s been a quiet week, a time to rest and recharge the batteries before the challenges that lie ahead.

The rights of people living with Dementia, under the United Nations Conventions and therefore International Law, will play an ever increasing role in advocacy in 2019 and beyond.

Decisions will more and more be challenged under these Conventions.

The decisions of so called “Best Interest Meetings” will be challenged more and more to show that their decisions comply with the United Nations Conventions and International Law.

CCG’s and Health Trusts will be challenged when they do not provide equal services between conditions.

The services that are provided for conditions such as Cancer, Heart Disease, Stroke, Diabetes etc, must be provided equally for Dementia under the United Nations Conventions and International Law.

Legislation such as the Mental Capacity (Amendment) Bill will be challenged where they have the potential to remove peoples rights under the United Nations Conventions.

As will transport companies who fail to provide adequate assisted travel and the lack of reasonable adjustments under the Equalities Act 2010.

Around the UK, there are small pockets of good practice.

The need to challenge rights abuses and learn from the lessons of the past is even more pressing.

Dementia and other Disabilities will no longer sit at the back of the room silently and passively as everything about us, is without us.

The lessons of the past, should not haunt all our futures.

BBC Video How to talk about disability without being awkward.

“Above all, we need to change the way we do dementia in this country.”